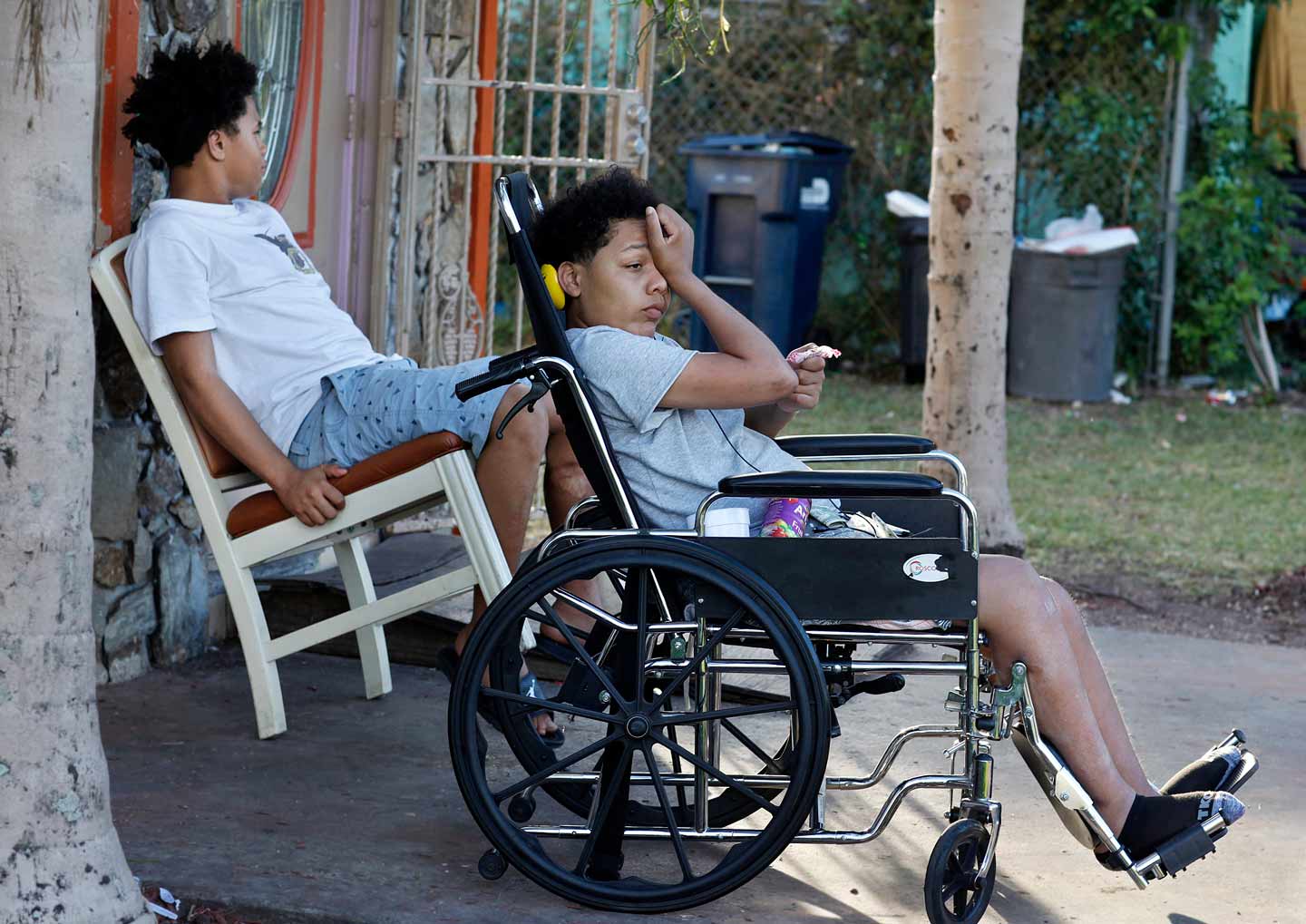 A week before Christmas, 15-year-old Martwan Santiago was at home in Florida City when he heard gunshots outside his window.

“I heard like 20 shots go off,” he recalled. “Pop! Pop! Pop!” Then, his big brother Martaevious, 16, stumbled into their home bleeding from the leg. Martaevious had been in the driveway sitting in a car with a friend. When the shooting started, he got out and ran; his friend, who stayed in the car, was shot in the head and barely made it out alive.

It was the second time in less than a year that gunfire had ricocheted through their family.

Eleven months earlier to the day, Martwan was shot four times on the street outside their old apartment, in a neighborhood locals call “The Alley.”

One bullet hit his buttocks, one struck his leg, one pierced his lung. The fourth careened through his spine and shattered part of his collarbone.

Martwan was paralyzed from the waist down.

Four days after Martaevious was shot, the two boys sat outside their new home—Martaevious on crutches, Martwan in a wheelchair—talking about what happened. “It’s all we been talking about for the last couple days,” Martaevious said. “How I got shot, and how he got shot. It just happened Sunday!”

When Martwan got shot, he collapsed onto the pavement, arms and legs splayed out to the side. “You couldn’t have told me my child wasn’t dead,” said Martwan’s mother, Lakesha Bess. Martwan’s stepfather, Vernon Williams, ran to his side.

“He said, ‘Dad I can’t breathe,’“ Williams recounted. “I laid down on the ground, and started sucking the blood from my son’s mouth.”

Martwan was rushed to the intensive care unit of Nicklaus Children’s Hospital in Miami, where he lapsed into a coma. He didn’t regain consciousness for more than a month.

“He thought he was going to be able to get out the bed and walk,” Bess said.

It took his parents close to a month to work up the courage to tell him he was paralyzed.

“I think the real downfall was the expression that he showed on his face,” said Williams . 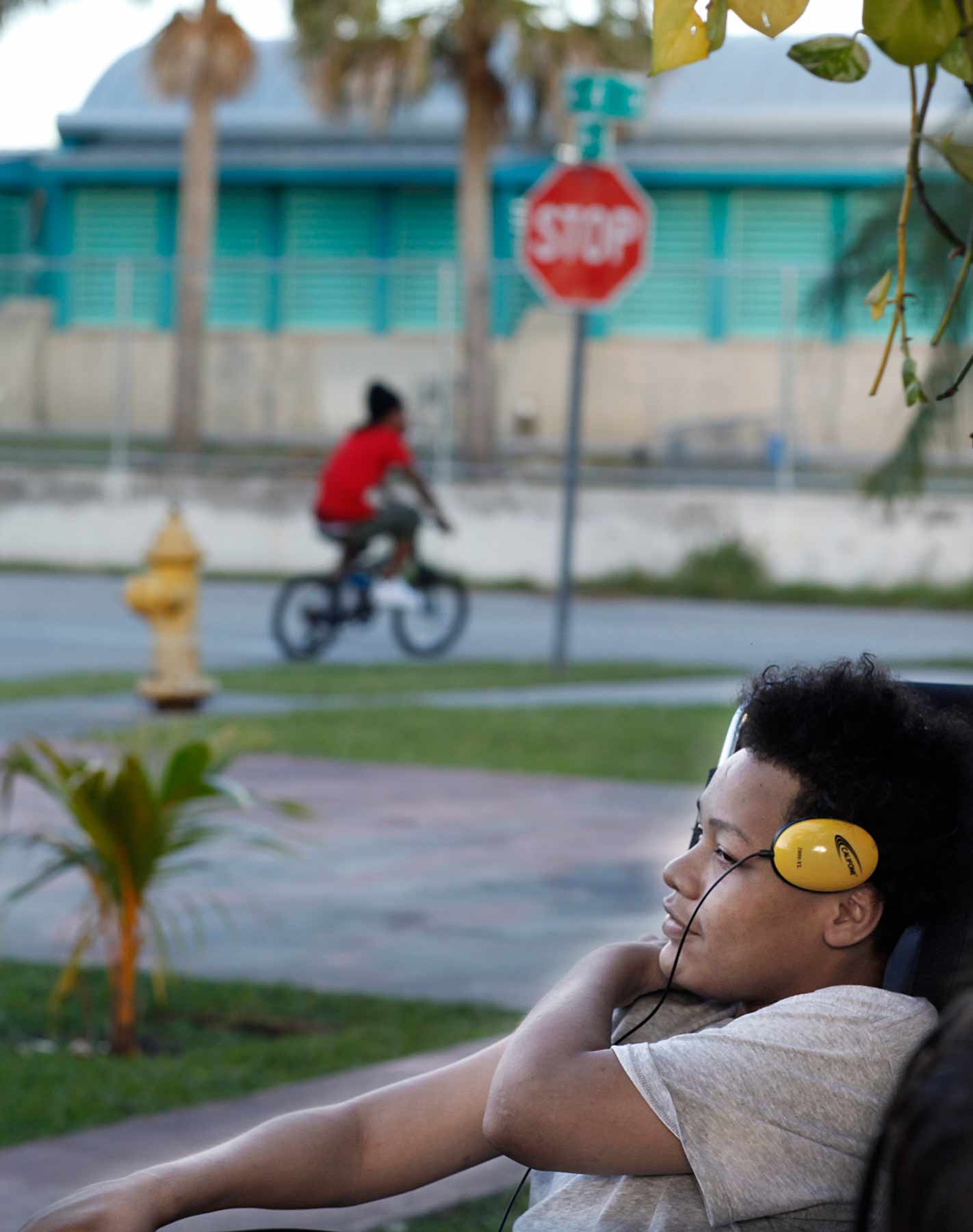 One by one, Martwan listed the things he loved to do—football, basketball, riding a bicycle—and asked, “I’ll never be able to do this again?”

As Martwan recovered, his siblings asked him constantly to tell them about the night he was paralyzed. “I tell them, ‘No, because I don’t like to talk about it because it gives me nightmares and stuff,” he said.

Now Martaevious understands why: “I never knew how he was feeling, until I got shot. Now, I feel the pain.”

“Hang around the wrong crowd of people, this is what happens,” Martaevious said.

Growing up, the boys spent their afternoons playing football after school. Martwan, in particular, had always been a rambunctious, high energy kid. “I used to go through—excuse my french—hell with Martwan,” his mother said.

When Martwan started getting into trouble, he brought Martaevious along with him.

By now, Martaevious says he’s been to jail 18 times, mostly for robberies. “Reason I do stuff like that because, I ain’t gonna say my mom don’t take care of me—she do, It’s just, I want more. Phones, dirt bikes, games, I didn’t have none of that.”

Their stepfather, Vernon Williams, supported the family by cooking at a resort an hour and a half away on Ducks Key. Their mom stayed at home to take care of the kids—10 brothers and sisters.

After Martwan got shot, Williams quit his job to work closer to home so he could help. He also moved the family away from the neighborhood where Martwan was shot—a part of Florida City locals call the Alley.

“The area we were living in, it was a place you don’t want to be,” said Williams. In the Alley, Williams said, any trouble his sons were tempted to get into was waiting right outside their door. “Every night there was a shooting. It was like a warzone.”

Last June, while Martwan was still in the hospital, Williams rented out what had been an abandoned house a half mile away, patching the walls and contending with cockroaches in the kitchen as the family moved in. “I got the house as-is. Renting for a year with an option to buy,” he explained. “I’m still working, so every little dime I get, instead of a 6 pack of beer I go out and get a plug or a fixture.”

While Martwan’s younger siblings planted a vegetable garden out back, Martwan directed the action from his wheelchair. But he still felt left out as his siblings roamed the block.

Martaevious and his twin, Martraevious, just a year older than Martwan, had always been his closest co-conspirators. Their mother nicknamed them after the Three Stooges—Larry, Curly and Moe. “So when he see Larry and Curly leave and Moe had to stay in the bed,” she said, “it sets him into a real bad depression.”

Bess grappled with her newfound responsibilities helping Martwan eat and get dressed, trying to walk him back from fits of deep despair. “Look on the big picture: you made it!” she’d tell Martwan, recalling the five young people her sons had known who had been shot and killed in the last year alone. “You’ve got a purpose here on Earth,” she’d say, “Don’t ignore it.”

Martaevious said Martwan’s injuries sent him into a spiral. “I turned to a savage. I just didn’t care no more,” he said. “I didn’t want to listen to what nobody said. I just kept robbing people, knocking people out, all types of stuff. I was bad. You ou can ask my dad.” 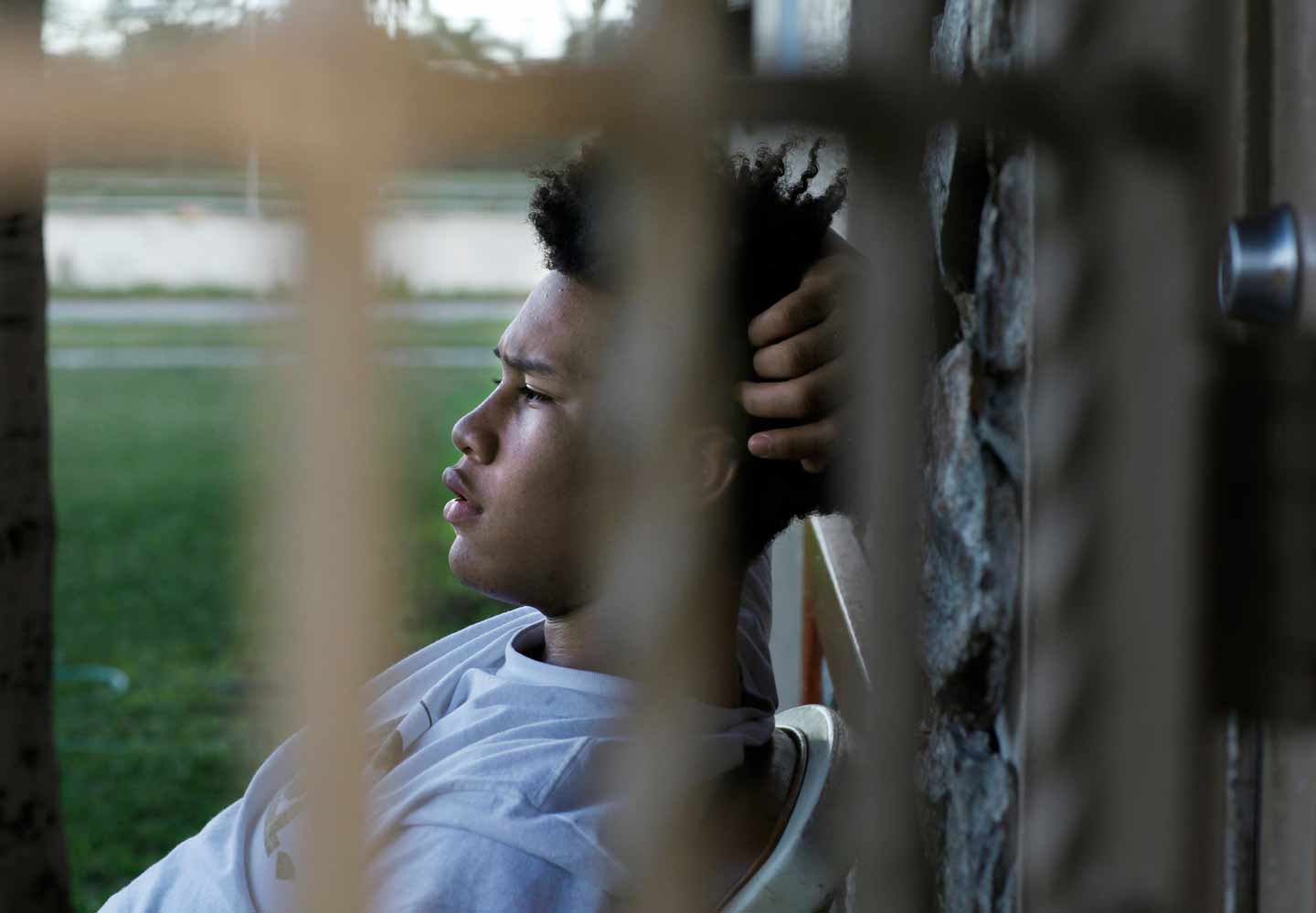 Martaevious Santiago ponders the effect of his brother's Martwan's shooting on his own life. | Photo: Marsha Halper

In many ways, Martwan’s injuries forced a clean break with his past. His days are spent in school and physical therapy at a program for children with complex medical needs. In the afternoons, he sits outside watching his younger siblings play.

He wants to become a mentor for kids tempted by crime. “I look at other kids like me and I just want to help them and show them that they could do something with their life. No more violence, no more stuff like that no more,” Martwan said. “It’s just not worth it.”

“He’s waking up, he’s smelling the coffee,” Martaevious said. “He don’t smoke no more. He stays away from a lot of people.”

When old friends did come to visit Martwan at home, they left with a tablet he had been given by the hospital. “The ones you call your brothers are the same ones who will get you caught up,” Martwan said.

“Get you shot, get you killed,” Martaevious added. “Get you behind bars for something they did.” It had only been four days, but Martaevious swore being shot had changed him too. “It opened up my eyes,” he said. “I just cut a lot of people off.”

He worried, though, that his younger siblings were right to be afraid of staying in their new home. “Every time we move, it’s like violence come behind us, like bad luck,” he said.

“They raising babies to be killers,” Martaevious said, echoing his younger brother. “I barely watch the news and it’s the only thing I see: juvenile this, juvenile that. It’s crazy. It’s not even old people no more. It’s us: It’s our generation.”