How We Lost Funding For Gun Injury Research

LISTEN: How We Lost Funding For Gun Injury Research

She’s one of the surgeons who’s operated on the more than 850 children and teenagers with gunshot wounds who came through the trauma center in the past decade.

What got them there and what happened to them afterwards—those are questions Zakrison would like answered. But she was initially advised by mentors and research advisors that she should avoid focusing on gun-related trauma.

“I was told very bluntly that you should not be looking at this topic because it's going to be harmful to your career academically because there's no money out there for it,” she recalls. In an academic field that partially measures success by grants and publications, she was told gun injury research would “be devastating” to her career.

There was a time Zakrison would not have been told this.

The Centers for Disease Control and Prevention—the federal agency responsible for safeguarding Americans’ health—used to support research into gun-related injuries. But about 20 years ago, that all came to a grinding halt.

Back then, Dr. Mark Rosenberg was the first director for the CDC’s National Center for Injury Prevention and Control. He drew inspiration for what he was doing from how the United States addressed the epidemic of car crash deaths decades earlier.

“We said this is unacceptable and we are going to use scientific research to stop these needless deaths,” says Rosenberg. He points out that the country responded to the crisis by investing hundreds of millions of dollars and developing the National Highway Traffic Safety Administration.

“And that research resulted in totally redesigning the car,” says Rosenberg. “And we said, ‘why don't we apply the same thing to the epidemic of gun violence?’ “

So Rosenberg and his fellow CDC researchers started asking basic questions about who gets shot and under what circumstances. In 1993, a study that was funded by Rosenberg’s department found a correlation between having a gun in the house and an increased risk of homicide.

“The National Rifle Association caught wind of this,” says Zakrison. “That was like the spark that made them support the omnibus bill of 1996, which essentially kneecapped all funding at the CDC level in terms of looking into firearm-related violence and ways to prevent this injury in households.”

The omnibus spending bill is better known as the federal budget.

One of the lawmakers involved in writing the bill in 1996 was Jay Dickey, a Republican congressman from Arkansas who had the endorsement of the National Rifle Association.

He says a lobbyist alerted him to the CDC’s gun-injury research.

“What I thought was happening was CDC wanted the money, call it research and go and sell gun control to whoever would listen under the auspices of the federal government,” says Dickey. “They were trying to destroy the Second Amendment. And I didn't want that.”

In 1996 Dickey sat on a House appropriations subcommittee. It held budget hearings for a couple of agencies--including the CDC. That year, Mark Rosenberg was called to talk about his division.

“It's always hard to defend CDC's budget because while people understand why you need money to treat someone who gets sick, they don't fully understand why it's so important to spend money to prevent these problems,” says Rosenberg.

Rosenberg knew it would be a tough sell, but he wasn’t expecting the questions he got from Dickey:

How can you stop violence by attacking the gun?

Did you ever say [firearms should be] “dirty, deadly, banned”?

Won’t you concede that your personal views on this subject blur your ability to treat this issue with objectivity and integrity?

“I wanted to hear how they were going do their research— their gun-advocacy research—without the gun-control agenda,” says Dickey.

The hearing adjourned. Congress went about writing its spending bill for the next year. Dickey made sure the spending bill explicitly said no CDC funds could be spent on promoting or advocating gun control. The bill cut all the funding—$2.6 million—for gun-injury studies.

Rosenberg says the move sent a message: “If you do research in this area, first of all there's not going to be money available to fund you or to support your dissertation or research.”

The rule written into that omnibus bill became known as the Dickey Amendment. The research about gun injuries basically stopped.

“I thought the thing was over,” says Dickey.

But it was not over. In the years afterwards, Rosenberg and Dickey stayed in touch. They started talking through their differences.

Rosenberg says Dickey showed him the CDC needed to be clear: It didn’t want to take guns away; it wanted to protect law-abiding citizens and prevent violence.

“And before that, CDC had not stated that explicitly, but I came to see how important it was,” says Rosenberg.

And Dickey came to understand what had happened as a missed opportunity.

“The discussions that Dr. Rosenberg and I had after that time were probably what should have taken place when we were in the heat of the battle,” says Dickey. He says he didn’t realize back then that there could be research into gun-related injuries without advocacy.

But by the time Rosenberg and Dickey were seeing eye-to-eye, it was too late; The Dickey Amendment was law and Rosenberg was let go from the CDC.

Which brings us back to Miami today.

“What ends up happening is that we're only dealing with the symptoms of these kids when they show up with either behavioral issues or the mental health challenges,” says Dr. Roderick King, a pediatrician and an assistant dean of the University of Miami’s public health program. “But we're not able to garner the resources and the attention and the staffing to be able to understand what are the implications for these kids in terms of the mental health impact of the gun violence,” he says.

King says that a study that tracks kids over a long period of time and looks at trauma and experiences with violence could take years and cost millions and millions of dollars. And the funding for other long-term public health research into things like tobacco or cancer or highway safety typically comes from big federal grants. 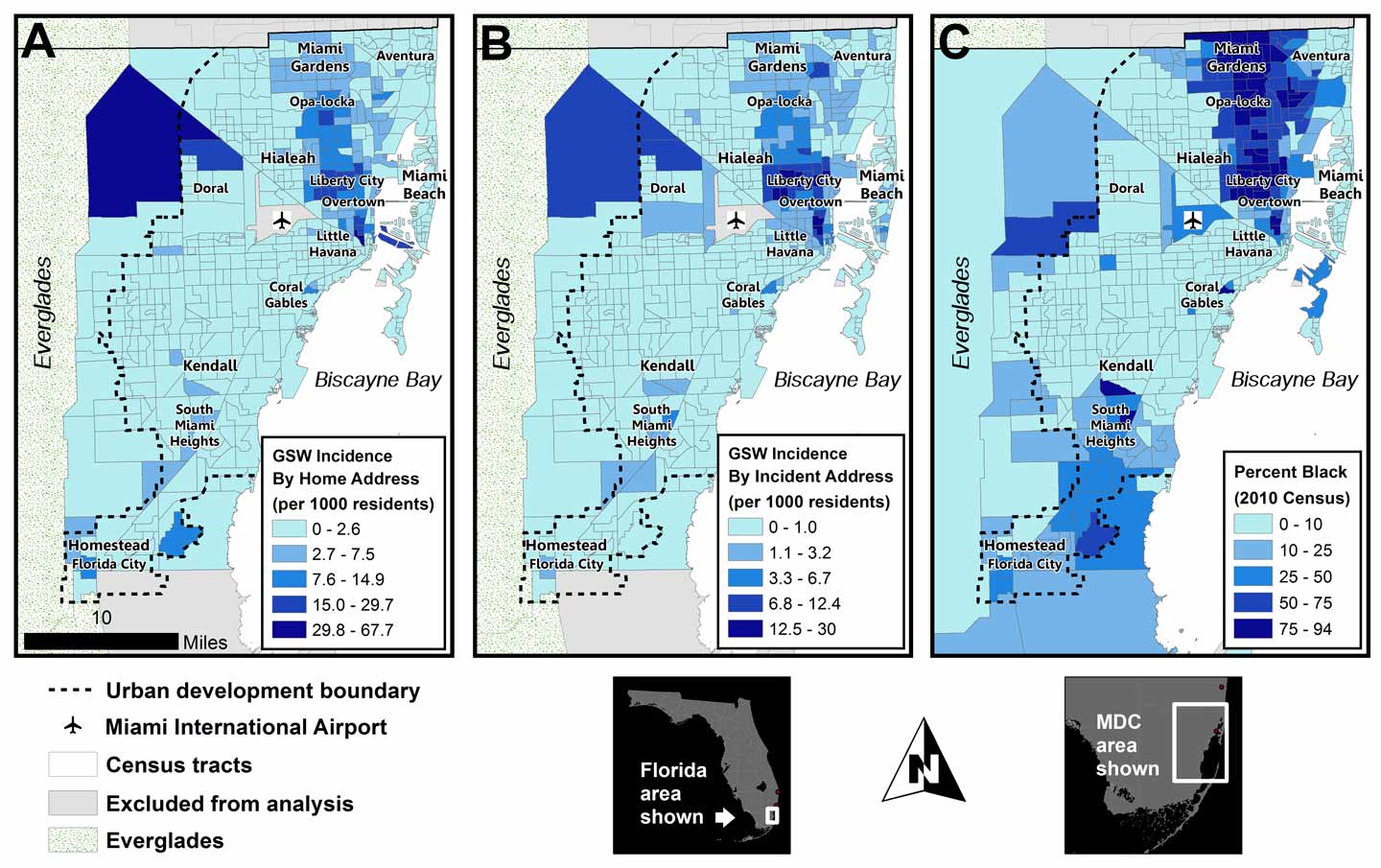 From the study "Geo-demographic Indicators of the Prevalence and Outcomes of Firearm Violence in Miami-Dade County." | Credit: Dr. Tanya Zakrison.

That hasn’t stopped King or his colleague Zakrison from doing what self-funded research they can. They lean on graduate students to analyze patient data collected at Ryder Trauma Center in Miami.

Zakrison recently worked with a team that mapped more than 4,500 gunshot wound patients from an 11-year period in Miami. They found young black men were disproportionately victims of gun violence. And consistently there were whole neighborhoods that had clusters of gunshot patients.

“Absolutely, we need to intervene,” says Zakrison. “Intervene downstream, from an injury prevention perspective, and upstream, looking at the causes.”

Over the years, there have been failed attempts to repeal the Dickey Amendment and fund firearm injury research. But Rosenberg is still optimistic.

“The second best time to start answering these priority questions is now.”